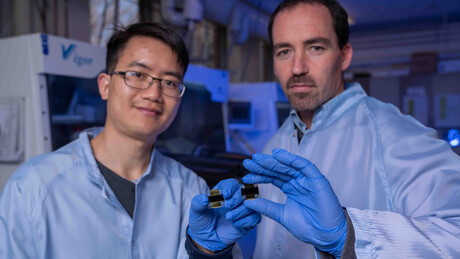 Researchers at the Australian National University (ANU) have reached 21.6% efficiency in converting sunlight into electricity — a new world record for perovskite solar cells larger than 1 cm2 in size. They achieved their breakthrough by adapting a technique which has already proven successful with silicon solar cells, according to lead researcher Associate Professor Tom White.

“A common problem with solar cells is that any defects in the cell can trap electrons, taking away the energy they gained by absorbing sunlight,” Assoc Prof White said.

“A way around this is to ‘passivate’ the surface by coating the light-absorbing material with a thin layer of another material to reduce defects. But the materials used to reduce defects are often poor conductors of electricity.”

The solution to this problem was proposed by Dr Jun Peng, who explained, “Some silicon cells use holes to let the electrons through this insulating layer, creating a kind of conductive pathway. We decided to take a similar approach with our perovskite cells.

“The idea behind it and the reasons it works are the same, but our models showed us that to make it work on perovskite solar cells, we would need to manufacture these holes on the scale of nanometres — thousands of times smaller than is used in silicon.

“Thus, instead of holes, we used nanoscale rods that poke through the insulating layer.”

This is the first time this technique has been applied to perovskite cells, so the researchers used computer simulations to prove it worked. Modelling work on the project was led by Dr Daniel Walter, who said, “Computer models are really useful in a study like this.

“Once you have made a solar cell it can be difficult to probe inside them to see what is happening. We were able to simulate what was happening inside the cells to explain how the nanorods improved the cell performance.”

The team’s record result was published in the journal Science and has been independently verified by CSIRO’s Photovoltaics Performance Laboratory. But their work is not over yet, with Assoc Prof White saying, “We’ll continue to work to achieve even higher efficiencies with perovskite.

“Silicon will reach its upper limit of efficiency very soon, so we see these perovskites cells as the way forward,” he said.