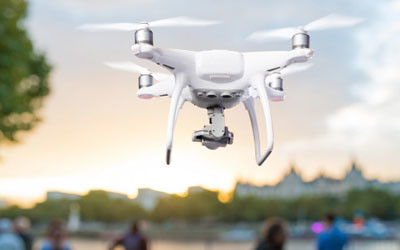 A drone to remotely detect people in crowds with infectious respiratory conditions such as COVID-19 is being developed by University of South Australia researchers in partnership with a Canadian tech company.

Dubbed the ‘pandemic drone’ by researchers, the UAV will be fitted with a specialised sensor and computer vision system that can monitor temperature, heart and respiratory rates, as well as detect people sneezing and coughing in crowds, offices, airports, cruise ships, aged-care homes and other places where groups congregate.

“There’s a lot of engineering going on right now but the aspiration is to have this in some sort of initial capability within six months,” Professor Chahl said.

“It’s one thing to have it work in a science experiment type scenario, but getting it to run in the field on a real piece of hardware is quite a challenge.”

Professor Chahl and his team achieved global recognition in 2017 when they demonstrated image-processing algorithms that could extract a human’s heart rate from drone video. Since then they have demonstrated that heart rate and breathing rate can be measured with high accuracy within 5–10 metres of people, using drones, and at distances of up to 50 metres with fixed cameras. They have also developed algorithms that can interpret human actions such as sneezing and coughing.

The research has previously looked at using the drones to monitor and react to elderly falls, look for signs of life in war zones or following a natural disaster, and monitoring the heart rates of babies in neonatal incubators. Professor Chahl said the technology was being adapted and fast tracked to potentially become a viable screening tool for the COVID-19 pandemic.

“We had always thought the technology could be used for something like this, but we also thought that this was something down the track as a nasty possibility,” he said.

“Now, shockingly, we see a need for its use immediately, to help save lives in the biggest health catastrophe the world has experienced in the past 100 years.

“It might not detect all cases, but it could be a reliable tool to detect the presence of the disease in a place or in a group of people.”

Draganfly CEO Cameron Chell said the Canadian company would use its sensor, software and engineering expertise to work with UniSA to integrate and deploy for government, medical and commercial customers.

“We are honoured to work on such an important project given the current pandemic facing the world with COVID-19,” he said.

“Health and respiratory monitoring will be vital not only for detection but also to understand health trends.”

This story has been republished from The Lead South Australia under CC BY 4.0