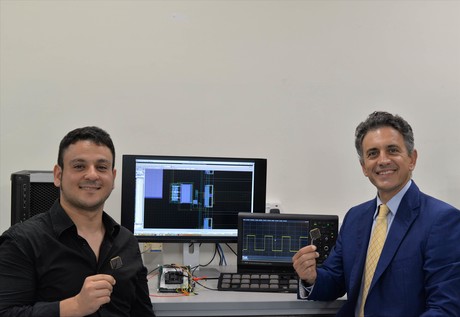 Researchers from the National University of Singapore (NUS) have invented a low-cost ‘battery-less’ wake-up timer — in the form of an on-chip circuit — that significantly reduces the power consumption of silicon chips for Internet of Things (IoT) sensor nodes, bringing it down to true picoWatt range — one billion times lower than a smart watch.

The NUS team, led by Associate Professor Massimo Alioto, collaborated with Associate Professor Paolo Crovetti from Italy’s Politecnico di Torino to reduce the power consumption of wake-up timers embedded in IoT sensor nodes, which in many cases require decades of battery lifetime. Presented at the 2018 Symposia on VLSI Technology and Circuits in Hawaii, the team’s timer is claimed to cut the power consumption of rarely active IoT sensor nodes by 1000 times.

“As an element of uniqueness, our wake-up timer does not need any additional circuitry — as opposed to conventional technologies, which require peripheral circuits consuming at least 1000 times more power (eg, voltage regulators),” said Assoc Prof Alioto. This ability to operate without any voltage regulator is due to the timer’s reduced sensitivity to supply voltage, thus suppressing the additional power that is conventionally consumed by such peripheral always-on circuits.

“Under typical office lighting, our novel wake-up timer can be powered by a very small on-chip solar cell that has a diameter similar to that of a strand human hair,” Assoc Prof Alioto added. “It can also be sustained by a millimetre-scale battery for decades.”

The wake-up timer can continue operations even when battery is not available and under very scarce ambient power, as demonstrated by a miniaturised on-chip solar cell exposed to moonlight. It can also achieve slow and infrequent wake-up using a very small on-chip capacitor (half a picoFarad), helping to significantly reduce silicon manufacturing costs due to the small area (40 um on each side) required.

The team is currently working on various low-cost, easy-to-integrate, energy-autonomous silicon systems with power consumption ranging from picoWatts to sub-nanoWatts. These critical sub-systems will make future battery-less sensors a reality, with the end goal of building a complete battery-less system-on-chip.

“We have demonstrated silicon chips with substantially lower power that will define the profile of next-generation IoT nodes,” said team member Dr Orazio Aiello, a Visiting Research Fellow at NUS. “This will contribute towards realising the ultimate vision of inexpensive, millimetre-scale and, eventually, battery-less sensor nodes.”

Image caption: The wake-up timer is embedded in a test chip and placed in a larger package (held by Dr Orazio Aiello and Associate Professor Massimo Alioto researchers) for easier testing and characterisation.