As more RF communications, test, software-defined radio (SDR) and other similar applications press the technology further, Digilent, an NI company, has been hard at work to not only keep up the pace but also explore ways to influence the direction of this evolution. 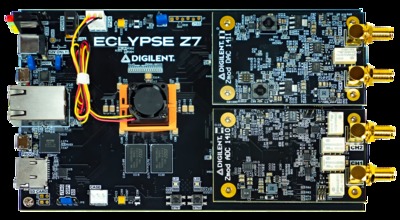 The Eclypse Z7 ecosystem, available from Excelpoint, includes the Eclypse Z7 Xilinx Zynq SoC Platform, Zmod ADC 1410 and Zmod DAC 1411. Zmods products are SYZYGY compliant expansion modules, a high-speed I/O expansion standard for FPGA boards intended to fit between the Pmod standard and FMC. The SYZYGY standard offers a much higher speed/bandwidth digital interface than Pmod but at a much smaller and lower-cost form-factor than FMC, enabling the user to configure a FPGA development board with the right I/O for their application.

With the Eclypse Z7 system, engineers and developers can experiment with different signal processing techniques. Digilent provides an example project which showcases the implementation of a Zynq-based 32-order finite impulse response (FIR) filter design on Linux. The 32-order FIR filter, clock-enabled generator and a signal generator are implemented in the programmable logic of the Xilinx Zynq 7000 SoC. A Linux OS is run on the processing system. Quantification of the coefficients, a Hanning window, can be computed in C. The details are available at the Digilent Project Page. 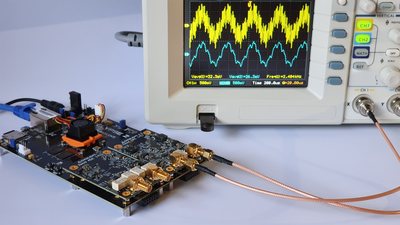 As millimetre wave frequencies are now being used for commercial and consumer electronics, design...

Feedback on the ACMA's spectrum outlook

More engineers to be trained for HF radar

Tech school students ahead of the game