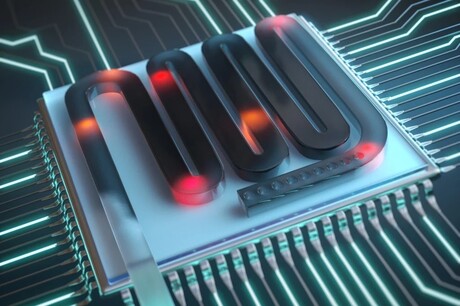 Researchers at the Max Planck Institute of Quantum Optics have laid the foundation for the development of future quantum networks, by embedding individual erbium atoms in crystalline silicon, creating ideal conditions for storing and passing on quantum information, and for the secure exchange of data in a quantum internet.

The atoms can be connected by light at a wavelength that is commonly used in telecommunications. Since the new experimental results were achieved without sophisticated cooling and are based on established methods of semiconductor production, the method appears suitable for large networks. The research findings were published in Physical Review X.

When quantum computers are connected to a network, new possibilities can arise — such a quantum network can be realised by entangling individual carriers of quantum information, so-called qubits, with each other using light. The qubits, in turn, can be built from individual atoms that are isolated from one another and embedded in a host crystal.

The new technology relies on erbium atoms that are implanted into the crystal lattice of silicon under specific conditions. Dr Andreas Reiserer, head of the Otto Hahn Quantum Networks research group at MPQ, said that the researchers knew from earlier experiments that erbium had good optical properties for such an application. The atoms of this rare-earth element emit infrared light at a wavelength of approximately 1550 nanometres — the spectral range used for data transport in optical fibre cables. It exhibits only low loss during propagation in a light-conducting fibre. “In addition, the light emitted by erbium has excellent coherence,” Reiserer said.

This means that individual wave trains are in a stable phase relationship to one another — a prerequisite for the storage and transmission of quantum information. According to Reiserer, these characteristics make erbium a prime candidate for realising a quantum computer, or for being used as an information carrier in a quantum network. Among other things, the researchers at MPQ had to embed individual atoms of the rare-earth element in the crystalline matrix in a targeted and reproducible manner, and fix them in specific positions relative to the silicon atoms.

“We chose silicon for this because it is already used for classical semiconductors that form the basis of our information society. Established processes are available for the preparation of silicon crystals of high quality and purity,” Reiserer said.

To integrate erbium atoms into such a crystal, it first had to be endowed with nanometre-fine structures that served as light-conducting elements. Then, the researchers irradiated the silicon with a beam of erbium ions so that individual atoms penetrated and dispersed to different places at high temperatures. Andreas Gritsch, a doctoral student on the team, said that in contrast to the usual procedure, the researchers did not heat the chips to 1000, but to a maximum of 500°C. The consequence of the comparatively moderate temperature was a particularly stable integration of individual erbium atoms in the crystal lattice, without a larger number of atoms clustering together. “This manifested itself in unusually narrow spectral lines in the emission of infrared light by the erbium. At around 10 kilohertz, which is the smallest spectral linewidth measured in nanostructures to date. This is also a favourable property for the construction of a quantum network,” Gritsch said.

There is another feature that distinguishes the method optimised by the researchers for developing the silicon crystal: the excellent optical properties of the introduced erbium atoms do not only show up in the immediate vicinity of absolute zero at –273° as in previous experiments. Instead, they can also be observed at temperatures considered ‘high’ for quantum phenomena of around eight Kelvin (degrees above absolute zero).

And there is another feature that distinguishes the method optimised by the Garching researchers for doping the silicon crystal: The excellent optical properties of the introduced erbium atoms do not only show up in the immediate vicinity of absolute zero at minus 273 degrees Celsius as in previous experiments. Instead, they can also be observed at temperatures considered “high” for quantum phenomena of around 8 Kelvin (degrees above absolute zero). “Such a temperature can be achieved by cooling in a cryostat with liquid helium. This is technologically easy to realise and paves the way towards future applications,” Reiserer said.

The range of possible future applications for quantum networks is broad; according to Reiserer, quantum computers could be built from them, in which a large number of separate processors are interconnected. With such computing machines, which use certain quantum mechanical effects, complex tasks can be mastered that cannot be solved with conventional, classical systems. Alternatively, quantum networks could be used to investigate the properties of new types of materials. “Or they could be used to build a kind of quantum internet in which previously unattainable amounts of information could be transmitted — similar to the normal internet, but encrypted securely using quantum cryptography,” Reiserer said.

To achieve these potential applications, researchers must quantum-mechanically entangle qubits in a network, to show that this is also possible based on erbium atoms in silicon chips. Together with his team, Reiserer is working on showing that the circuits for powerful quantum networks can be produced similarly to microchips for mobile phones or notebook computers.

Researchers in Japan have experimentally demonstrated a fully connected annealing processor that...