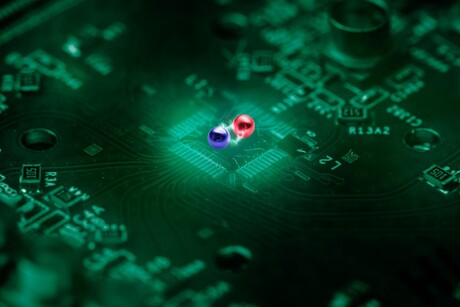 Three new studies, published back-to-back in the journal Nature, have reported high-fidelity (>99%) two-qubit gates based on spin qubits in silicon, confirming that robust, reliable quantum computing in silicon is now a reality. Together, the trio of results amplifies the promise of semiconductor spin qubits.

The world is currently in a race to develop large-scale quantum computers that could vastly outperform classical computers in certain areas. However, these efforts have been hindered by a number of factors, including in particular the problem of decoherence, or noise generated in the qubits. This problem becomes more serious with the number of qubits, hampering scaling up.

In order to achieve a large-scale computer that could be used for useful applications, it is believed that a two-qubit gate fidelity (accuracy) of at least 99% to implement the surface code for error correction is required, as the laws of quantum physics pose severe restrictions on how the correction takes place in a quantum computer. This has been achieved in certain types of computers, using qubits based on superconducting circuits, trapped ions and nitrogen-vacancy centres in diamond, but these are hard to scale up to the millions of qubits required to implement practical quantum computation with an error correction.

Semiconductor spin qubits in silicon are stable enough to hold quantum information for long periods and can be scaled up using techniques familiar from existing advanced semiconductor manufacturing technology, but have difficulty performing quantum logic operations with sufficiently high accuracy. The higher the accuracy of the operations, the higher the likelihood that near-term applications for quantum computers come in reach, and the higher the likelihood that errors can be corrected faster than they appear.

The first of the new studies, by RIKEN and QuTech (a collaboration between TU Delft and TNO, the Netherlands Organisation for Applied Scientific Research), saw researchers demonstrate a two-qubit gate fidelity of 99.5% — higher than the 99% considered to be the threshold for building fault-tolerant computers — using electron spin qubits in silicon. To carry out their work, the researchers experimented with a quantum dot structure that was fabricated by nanofabrication on a strained silicon/silicon germanium quantum well substrate, using a controlled-NOT (CNOT) gate.

In previous experiments, the gate fidelity was limited due to slow gate speed. To improve the gate speed, the team carefully designed the device and tuned the device operation condition by voltages applied to gate electrodes to combine the established fast single-spin rotation technique using micromagnets and a large two-qubit coupling. This allows them to enhance the gate speed by a factor of 10 compared to previous work. Interestingly, it was previously believed the increasing gate speed would always lead to better fidelity, but they found that there was a limit, and that beyond that the increasing speed actually made the fidelity worse. 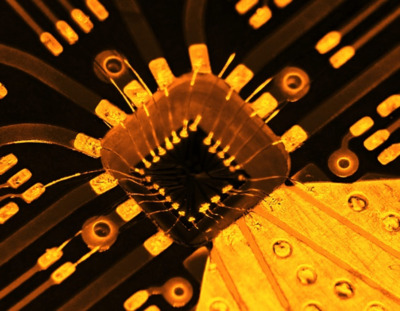 The silicon quantum computer chip used in the RIKEN study.

Through the work, the researchers discovered that a property called the Rabi frequency — a marker of how the qubits change states in response to an oscillating field — is key to the performance of the system, and they found a range of frequencies for which the single-qubit gate fidelity was 99.8% and the two-qubit gate fidelity was 99.5%, clearing the required threshold. Through this, they demonstrated that they could achieve universal operations, meaning that all the basic operations that constitute quantum operations, consisting of a single-qubit operation and a two-qubit operation, could be performed with the gate fidelities above the error correction threshold.

To test the capability of the new system, the researchers implemented a two-qubit Deutsch-Jozsa algorithm and the Grover search algorithm. Both algorithms output correct results with a high fidelity of 96–97%, demonstrating that silicon quantum computers can perform quantum calculations with high accuracy.

“We are very happy to have achieved high-fidelity universal quantum gate set, one of the key challenges for silicon quantum computers,” said Akito Noiri, the first author of the study.

“The presented result makes spin qubits, for the first time, competitive against superconducting circuits and ion traps in terms of universal quantum control performance,” added Seigo Tarucha, leader of the research group. “This study demonstrates that silicon quantum computers are promising candidates, along with superconductivity and ion traps, for research and development toward the realisation of large-scale quantum computers.”

“Now that this important 99% barrier for the two-qubit gate fidelity has been surpassed, semiconductor qubits have gained credibility as a leading platform, not only for scaling but also for high-fidelity control.” 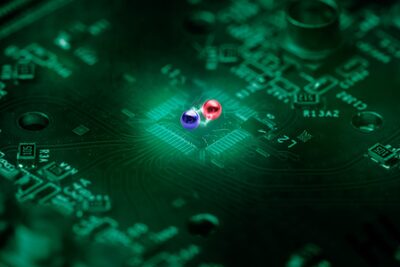 “A universal gate set with fidelity above 99.5% is an important step for semiconductor spin qubits,” added supervising researcher Lieven Vandersypen. “Independent studies have shown spin qubit readout with a fidelity above 98% in only a few µs, with further improvements underway.

“With a further effort in reducing crosstalk errors and in extending the device designs, we are optimistic that the individually demonstrated advantages of semiconductor spin qubits can be combined into a fault-tolerant and highly integrated quantum computer.”

The last of the studies was led by Professor Andrea Morello and his team at UNSW Sydney, in collaboration with researchers at the University of Technology Sydney and The University of Melbourne as well as in the US, Japan and Egypt. Together, they achieved one-qubit operation fidelities up to 99.95% and two-qubit fidelity of 99.37% with a three-qubit system comprising an electron and two phosphorous atoms, introduced in silicon via ion implantation.

Prof Morello had previously demonstrated that he could preserve quantum information in silicon for 35 seconds — described by Prof Morello as “an eternity” in the quantum world — due to the extreme isolation of nuclear spins from their environment. “To give a comparison,” he said, “in the famous Google and IBM superconducting quantum computers the lifetime is about a hundred microseconds — nearly a million times shorter.”

The trade-off was that isolating the qubits made it seemingly impossible for them to interact with each other, as necessary to perform actual computations. The new paper describes how Prof Morello’s team overcame this problem by using an electron encompassing two nuclei of phosphorus atoms.

“If you have two nuclei that are connected to the same electron, you can make them do a quantum operation,” said Mateusz Mądzik, one of the lead experimental authors on the study.

“While you don’t operate the electron, those nuclei safely store their quantum information. But now you have the option of making them talk to each other via the electron, to realise universal quantum operations that can be adapted to any computational problem.”

“This really is an unlocking technology,” said Dr Serwan Asaad, another lead experimental author. “The nuclear spins are the core quantum processor. If you entangle them with the electron, then the electron can then be moved to another place and entangled with other qubit nuclei further afield, opening the way to making large arrays of qubits capable of robust and useful computations.” 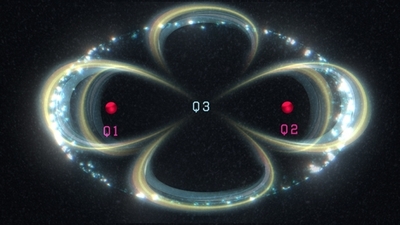 Professor David Jamieson, research leader at The University of Melbourne, added, “The phosphorous atoms were introduced in the silicon chip using ion implantation, the same method used in all existing silicon computer chips. This ensures that our quantum breakthrough is compatible with the broader semiconductor industry.”

“When the errors are so rare, it becomes possible to detect them and correct them when they occur,” he said. “This shows that it is possible to build quantum computers that have enough scale, and enough power, to handle meaningful computation.”