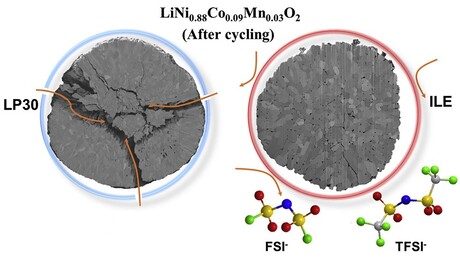 Researchers at the Helmholtz Institute Ulm (HIU) have created a new type of lithium-metal battery using a promising combination of cathode and electrolyte; the nickel-rich cathode enables storage of high energy per unit mass, while the ionic liquid electrolyte ensures largely stable capacity over many cycles. As a result, the battery is able to reach an extremely high energy density with impressive stability, as reported in the journal Joule.

Currently, lithium-ion batteries represent the most common solution for mobile power supply. In some applications, however, this technology reaches its limits. This especially holds for electric mobility, where lightweight and compact vehicles with large ranges are desired.

Lithium-metal batteries are a potential alternative as they are characterised by a high energy density, meaning that they store a large amount of energy per unit mass or volume. However, stability is a problem, because the electrode materials react with conventional electrolyte systems. HIU researchers have now found a solution, using a promising new combination of materials.

A cobalt-poor, nickel-rich layered cathode (NCM88) reaches a high energy density. With the usually applied, commercially available organic electrolyte (LP30), however, stability leaves a lot to be desired and storage capacity decreases with an increasing number of cycles.

“In the electrolyte LP30, particles crack on the cathode,” explained HIU Director Professor Stefano Passerini. “Inside these cracks, the electrolyte reacts and damages the structure. In addition, a thick mossy lithium-containing layer forms on the anode.”

For this reason, the scientists used a non-volatile, poorly flammable, dual-anion ionic liquid electrolyte (ILE) instead. HIU’s Dr Guk-Tae Kim revealed, “With the help of ILE, structural modifications on the nickel-rich cathode can be reduced significantly.”

The result is that the lithium-metal battery with the NCM88 cathode and the ILE electrolyte reaches an energy density of 560 watt-hours per kilogram (Wh/kg), based on the total weight of the active materials. Its initial storage capacity is 214 milliampere hours per gram (mAh g−1) of the cathode material. After 1000 cycles, 88% of the capacity is retained. The average Coulombic efficiency, ie, the ratio between discharge and charge capacity, is 99.94%. Furthermore, as the battery is characterised by high safety, the researchers say they have made an important step towards carbon-neutral mobility.