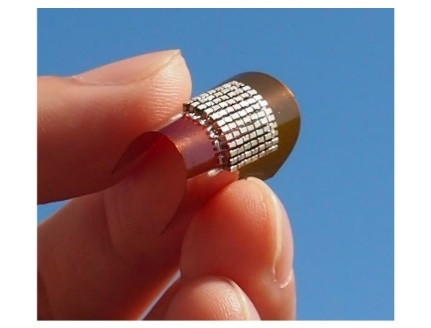 Japanese researchers are helping to power portable sensors that do not use batteries by generating electricity from heat that is otherwise wasted. Their work has been published in the journal Advanced Materials Technologies.

Interconnected health care and many other future applications will require internet connectivity between billions of sensors, which must be small, flexible, reliable and environmentally sustainable. Researchers must also develop new tools beyond batteries to power these devices, because continually replacing batteries is difficult and expensive. Now, scientists from Osaka University have revealed how the thermoelectric effect, or converting temperature differences into electricity, can be optimally used to power small, flexible devices.

Thermoelectric power generators have many advantages: they are self-sustaining and self-powered, they have no moving parts and they are stable and reliable. Aviation and many other industries already use the thermoelectric effect, but applications in thin, flexible displays are in their infancy.

Many researchers have optimised device performance solely from the standpoint of the thermoelectric materials themselves. But according to Tohru Sugahara, corresponding author of the new study, “Our approach is to also study the electrical contact, or the switch that turns the device on and off. The efficiency of any device critically depends on the contact resistance.”

The Osaka researchers used advanced engineering to make a bismuth telluride semiconductor on a flexible, thin polymer film weighing 0.4 g and measuring 100 mm2 — smaller than the size of an adult fingernail. They obtained a maximum output power density of 185 mW/cm2, with Sugahara saying, “The output power meets standard specifications for portable and wearable sensors.”

However, approximately 40% of the possible output power from the device was lost because of contact resistance. Sugahara noted, “Clearly, researchers should focus on improving the thermal and electrical contact resistance to improve power output even further.”